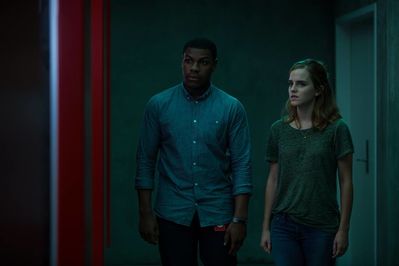 Although John Boyega has previously starred in projects like Attack the Block and 24: Live Another Day, it was after appearing in Star Wars: The Force Awakens as Finn that his acting career soared to new heights. Besides reprising Finn for The Last Jedi and Episode IX, Boyega has been cast in a number of other high-profile movies, including The Circle, where he performed alongside Emma Watson. When The Circle’s principal photography was winding down, Boyega found himself struggling with one of the scenes, but fortunately Watson was around to help him work through it with some advice on how to recall his lines. Boyega recalled:

My second to last day, I had a big speech that basically put the whole movie in context for the audience, and I just froze up. I froze up and I forgot the whole thing. I was there with Emma Watson, who was amazing about it. And I found myself in an Acting 101 class, with Emma trying to say, ‘Just remember the lines. What are your motivations?’ And I just couldn’t get it. It was embarrassing.

In order for John Boyega to make it through this scene, The Circle’s crew as forced to shoot it “chunk by chunk” rather than in one take. Boyega also informed his fellow actors at THR’s Actor Roundtable that this experience led him to realize that this issue he was dealing with was a “fear of schedule,” as he now finds himself being pressured with having more projects to work on. Regardless, Emma Watson’s advice to him was no doubt appreciated, and for any actors out there who find themselves struggling with lines, it never hurts to follow the Beauty and the Beast star’s cue and recall your character’s motivations. That by itself may not get the job done immediately, but it’s a good start.

Even though Star Wars: The Force Awakens was what introduced John Boyega to many people, 2017 has unquestionably been his biggest year yet. First he appeared as Ty Lafitte in The Circle, which was directed by James Ponsoldt and also starred Tom Hanks. That movie went on to make $40.6 million worldwide, but was met with negative critical reception. Next, Boyega appeared as Melvin Dismukes in Detroit, which only made $21.3 million worldwide, but was met with many positive reviews and could be a contender for the upcoming awards season. Finally, we’ll see Boyega back in the Star Wars universe for The Last Jedi, where Finn will go on an important mission for The Resistance. No doubt more projects are heading his way for the coming years, so let’s hope he heeds Watson’s earlier advice for those times when he fails to recall what he’s supposed to say next, not to mention keeps mindful about his scheduling.

John Boyega can be seen next in Star Wars: The Last Jedi on December 15, and then he’ll be back for Pacific Rim Uprising on March 23, 2018.